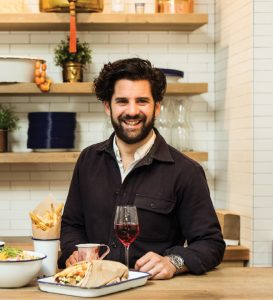 Charles Bililies ’06 was just a toddler back then, so he doesn’t actually remember it—but according to his parents, the first words that ever came out of his mouth involved ordering lunch at a restaurant. “The server came up to the table, and I turned to her and said the equivalent of ‘Hamburger, French fries, and lemonade,’ ” Bililies says, recounting the family legend with a laugh. “My parents just sat there in shock.”

It’s fitting, then, that Bililies grew up to be a restaurateur—and not just that, but a pioneer in an emerging sector of the dining industry. The Hotelie is the founder and CEO of Souvla, a trio of Greek eateries in San Francisco that, in the words of a recent New York Times article, is “to Bay Area restaurants what Uber is to gig-economy start-ups.” The chain—which is expanding to a fourth location, set to open in the Marina District in October—is a leader in the rising field of “fast-fine” dining, a more upscale answer to “fast-casual” restaurants like Chipotle or Panera. As at fast-casual places, Souvla customers order at the counter. But the food—served not on disposable plates, but blue-and-white enamelware—is delivered to your table, wine is available (in proper glasses), and you don’t bus your dishes at the end of the meal. “Even though no one comes to the table to take your order, a lot of the other steps of service are still very much in place,” says Bililies, who earned an associate’s degree in culinary arts at Johnson & Wales before transferring to Cornell.

Named one of the top 100 restaurants in the city by the San Francisco Chronicle for two years running, Souvla has its roots both in Bililies’s Greek heritage and in an “aha” moment he had back in summer 2009. Working in the Bay Area fine dining industry—first as an assistant to famed restaurateur Thomas Keller, later as the assistant general manager of the high-end French restaurant RN74—Bililies lived in a rare San Francisco apartment with a backyard, allowing him to host parties centered around his family tradition of spit-roasting whole animals. “The next day, I had some leftover lamb; someone had brought this beautiful heirloom tomato salad, and there happened to be some feta and pita bread lying around,” he recalls. “So I ended up making a sandwich that resembled a gyro or souvlaki but was made with awesome, spit-roasted lamb. A light bulb went off—first, it was delicious, and second, Why can’t I get this anywhere?” 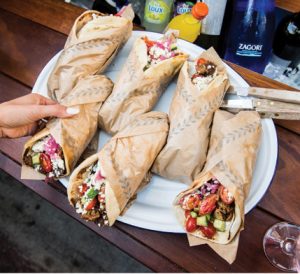 That planted the seed of opening a restaurant offering a more sophisticated take on the Greek fare that Americans often find served from a cart, the meat sliced from a cone rotating under a heat lamp. “This particular ethnic comfort food, or street food, hasn’t been modernized in the same way as, say, the hamburger or taco—given the chef treatment in terms of bringing more quality to it,” Bililies says. “I thought, How can I strip this product down to its basic architecture—warm, fluffy pita, cool yogurt, hot meat, veggies, cheese—but with more thoughtful sourcing and creativity?” And then, he says, there was the business side of the equation: given the financial challenges of the fine-dining industry—particularly in a city with sky-high rents and labor costs—“how can we take the service standards and experiences of fine dining, strip out the non-essentials, and re-engineer it into a business model that is actually profitable?”

It wasn’t until April 2014—after Bililies had quit his day job, spent six weeks traveling around Greece, developed a business plan, and raised funds—that he and a chef partner opened the first Souvla, in San Francisco’s Hayes Valley neighborhood. (The second opened in the NoPa neighborhood in June 2016, the third in the Mission District in January 2017.) The three locations now employ some 130 people and serve a total of 2,500 meals a day, about a quarter of which are delivery. The menu is streamlined by design. The main courses (priced at $12–$15) are free-range chicken, leg of lamb, pork shoulder, or roasted white sweet potato, each served with various accompaniments and available as either a sandwich or salad. Sides, costing around $5, include Greek fries (with olive oil, lemon juice, parsley, and Mizithra cheese) and Avgolemono, a traditional egg-lemon soup with chicken and rice. “It’s a great concept, and the food is wonderful,” says one of Bililies’s former professors, Hotel school senior lecturer Stephani Robson ’88, MS ’99, PhD ’10, who has sampled the fare firsthand. “It’s a very smart idea, which is a fairly limited menu of a cuisine that is just familiar enough but not that common. The menu is very well designed, and the quality is great.” 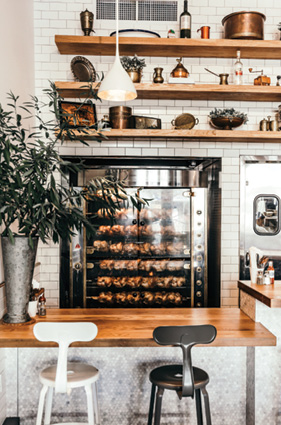 Souvla—the name means the skewer on which meats are roasted—also boasts what Bililies says is the only all-Greek beverage list in the U.S., down to the sodas, beer, and sparkling water. The wine list consists of a white, a red, a rosé, and a retsina (a classic Greek libation made with pine resin), each available either in a bottle or a quarter- or half-liter metal carafe, plus a sparkling wine. For dessert, there’s frozen Greek yogurt, with toppings like sour cherry syrup, olive oil and flaky salt, crumbled baklava, and honey. “Going out to eat at a full-service restaurant, especially in a high-cost market like San Francisco, is very expensive,” says Bililies. “Two people can come into Souvla, share a bottle of wine, and each have a salad or sandwich and be out the door for less than $60.” Bililies also designs the Souvla spaces, which have a common aesthetic—weathered copper surfaces, white subway tile, textured plaster walls, splashes of greenery. While food prep is done behind the scenes, diners have a prominent view of the eight-spit rotisserie. “We wanted to be very transparent about what you’re eating,” he says. “You’re watching pork shoulder, whole chicken, and leg of lamb be roasted—there’s no mystery meat.”

Last October—right around the time that Bon Appetit called Bililies the “Mark Zuckerberg of fast-fine dining”—he and his staff brought a delivery-only pop-up version of Souvla to New York for two days; orders sold out within minutes. (He’s currently scouting locations for a permanent New York location, with hopes to open in 2019.) And two months later, Souvla made headlines in the foodie world when it was revealed that, at the request of former First Lady Michelle Obama, the chain had delivered meals for her and her staff to eat on a recent plane ride to Washington, DC. “Everything was phenomenal,” Obama wrote in a thank-you note to the restaurant, “and it made our long flight home so much more enjoyable.”